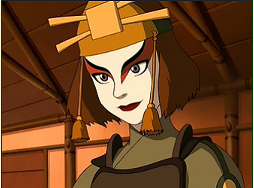 Suki is the leader of the Kyoshi Warriors and aids Aang and friends on their journey to save the world.

Suki is the 15 year old leader of the Kyoshi Warriors, an all-female group on the Earth Kingdom’s Kyoshi Island. Suki was trained as a warrior since the age of eight and quickly became a master of Tessenjutsu (The Art of Fans). She uses her skills and craftiness in combat and also in her warrior lessons to others. Suki’s friendship is very instrumental to Team Avatars success, especially in the later seasons.

Suki and her band of Kyoshi Warriors first meet Team Avatar by capturing them for intruding on Kyoshi Island, and because they suspect that Aang and his friends are Fire Nation spies. After an interrogation, where Suki threatens to throw out the ranting Sokka for his sexist comment about being captured by a “bunch of girls”, Suki discovers that Aang is the Avatar and the villagers proudly accept them as honored guests. 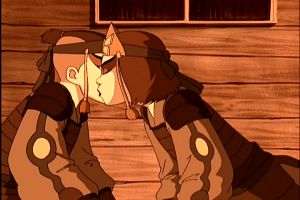 Suki thanks Sokka for helping her village.

As Aang and Katara get to know Kyoshi Island, Sokka and Suki get to know each other. Suki at first is perturbed with Sokka for his attitude towards female warriors, and easily gets pay back by challenging him in combat training. Sokka’s view point changes at his defeat and he asks to train with the girls. Suki, still not satisfied, allows him to train but only if he’s in full female attire.Suki’s warrior instincts eventually give way to her girlish ones though as she finds herself quickly falling for Sokka. As Sokka is saying goodbye she kisses him on the cheek and tells him that she is glad she is both a warrior and a girl. Inspired by Sokka, she then leads her team of warriors to assist in the war against the fire nation. 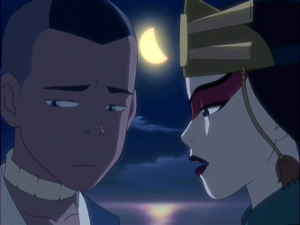 Sokka is reluctant to have a relationship with Suki because of his previous experience with Princess Yue.

Suki and her Kyoshi Warriors meet Team Avatar once again at the passage to Ba Sing Se, and romance as well as conflict are back in store for Suki. She valiantly chooses to help the gang assist a group of travelers through the treacherous Serpent’s Pass, which worries Sokka. Throughout the journey Sokka is reminded of just how capable Suki is though, especially when she dives into the serpent infested water to save a drowning Toph.

Attraction between the two is obvious, but when Suki reveals her true feelings by leaning in for a kiss later that night, Sokka pulls away and shows that he is still uneasy about a relationship because of the tragic ending with Princess Yue, who became the moon spirit. Suki is put out, but the next day decides to make things right and apologize to Sokka for acting rashly. Sokka doesn’t let her finish the apology but instead pulls her in for the kiss he’s been holding back. 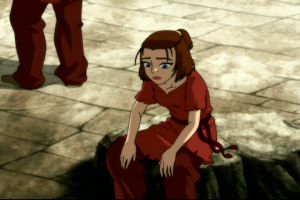 Suki is captured and taken to the Fire Nation's highest security prison.

After leaving Sokka and the rest of the group, she returns back to Kyoshi Island with her band of warriors only to find Appa, Aang’s lost sky bison. The warriors begin helping Appa when they are attacked by Azula, Mai, and Ty Lee. While fighting Azula, Suki does her best to keep Appa safe, but unfortunately this resulted in her own capture.

Suki is taken to The Boiling Rock, the Fire Nation’s highest security prison, with little hope for escape. Luckily for Suki, Sokka discovers her captivity in his attempt to rescue his father and does everything in his power to save her, including dressing up as a prison guard. In their final attempt to escape Sokka is impressed as Suki captures the warden and defeats Ty Lee. 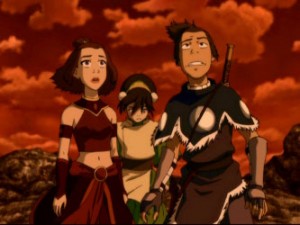 Sokka, Suki, and Toph are left to challenge the air strike.

Sokka and Suki’s romance continues as she decides to join the team in their final adventures. As Sozin’s Comet approaches, Aang disappears and it is left up to Suki, Sokka, and Toph to bring down an airship fleet that is on the attack. In the midst of battle Suki is seperated from her friends and Sokka is forced to carry on the mission without knowing whether she is okay or not. 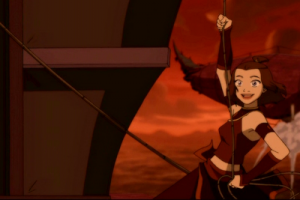 Sokka and Toph almost come to an end in their attempt to stop the fleet but as they are hanging helplessly to the edge of an airship, Suki miraculously returns and rescues them.

After the victorious battle, Suki celebrates with the group at Uncle Iroh’s tea shop and appears light hearted and still enchanted by Sokka’s quirky charm.