The Legend of Korra Episode 7 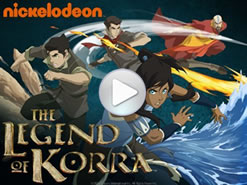 Watch The Legend of Korra Episode 7 For Free

Summary of The Legend of Korra Episode 7 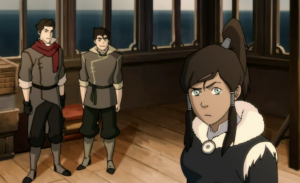 Mako and Bolin Move Out

With their home (the arena) destroyed by Amon, Mako and Bolin must find somewhere to move out.  Asami offers them a place in Sato Mansion which is unfortunate for Korra who wanted them to live with her on Air Temple Island.  Asami invites Korra to hang out with them in the Mansion on the following day.

The Metal Bending police have apparently gotten a lead that Cabbage Corp is harboring Amon propaganda and the new hand weaponry.  When they raid some of his storehouses they do find evidence of this in the form of large stashes of supplies of Equalist equipment.

Cabbage Corp. is frozen and it’s CEO is taken to jail for further questioning. 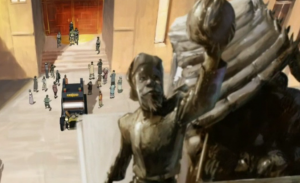 The Cabbage Corp leader is siezed for questioning after large stashes of Equalist Propaganda and weaponry were found in one of his storehouses.

Korra pays a visit to Sato Mansion to find the Bolin and Mako have settled right in, and are loving the pool and treatment they recieve from the Staff. When asked what they are going to do that day, Asami tells Korra that she has something special in mind. They head out to a racetrack where Sato’s company test drives any of their new Sato-Mobiles.

When Asami offers Korra to ride along with her in a race Korra is impressed that Asami isn’t just a prissy Daddy’s girl, and her opinion of Asami greatly improves. 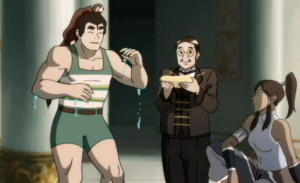 After Korra uses the “Powder Room” she overhears Sato talking to someone over the phone about being ready to strike with the Cabbage Corp investigation, she believes it means that Sato is working for the Equalists and runs away to tell Tenzin and Chief Bei Fong.

Chief Bei Fong asks Korra what evidence she has, Korra says she only overheard the phone call.  Bei Fong and Tenzin talk about how Sato has a motive in the fact that the Agni Kai Triad snuck into Sato Mansion years back and killed Satos wife, which means that Sato has a reason to be an Equalist supporter. 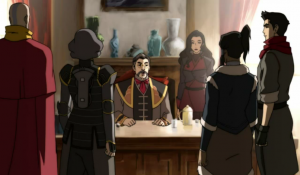 Hiroshi Sato agrees to allow the police to search all of his warehouses for signs of Equalist support.  When nothing is found Mako confronts Korra and accuses her of taking this out on Sato out of jealousy with him and Asami.  Mako says that unless Korra drops the accusation his and her friendship is through.  Korra tells Mako that Hiroshi Sato is not the man Mako thinks he is and that she knows that he is lying, Asami and Mako leave angrily.

Shortly after a worker for Sato walks by and secretly hands Korra a note which Korra quickly reads, it tells her to meet him under a bridge to learn more.  They meet the man under the bridge and learn that he is an ex-equalist who doesn’t want to get involved in a war.   He tells them that Hiroshi Sato manufactured the equalist gloves and that he is working on a new secret weapon that could be very dangerous.  He also tells them that Sato is manufacturing all of this in a secret factory underneath Sato Mansion. 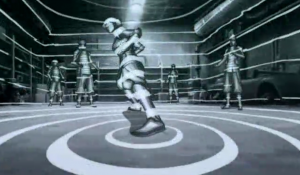 Asami is very hostile as the metal bending Police invade her home.  She believes they are lying in order to persecute her father.  When Asami tells them that Sato is in the back workshop they go to investigate and Chief Bei Fong uses the blind seeing technique perfected by Toph to discover a secret underground entrance to deep inside the Mountain.  She metal bends the entrance and heads down underground, informing an officer to watch Mako, Bolin, and Asami to make sure they don’t follow.

Asami is completely surprised and confused about the secret tunnel and doesn’t know what to think.

When the Metal Bending Force, Korra, and Tenzin make it to the bottom of the secret entrance they discover a huge factory with the secret weapon (mechanized warriors).  Which proves Sato’s guilt, they look for Sato and discover that the mechanized robots have Equalists including Sato in them ready to strike, they had been waiting their for them the entire time.

The robots prove too formidable for the force and after a fast paced battle Tenzin, Korra, and Chief Bei Fong and her crew are taken out of commission, knocked unconscious by the force of the new weapon.  Sato orders everyone to be delivered to Amon. 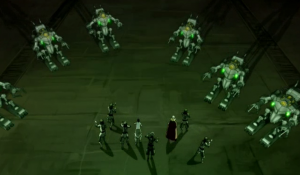 Hiroshi Sato ambushes Korra, Tenzin, and Chief Bei Fong along with her police force. With some new mechanized robot weapons.

Meanwhile Mako and Bolin were able to subdue the guard keeping them in place and make their way down through the secret entrance.  They learn the truth about Sato and try and carry Korra, Tenzin, and Cheif Bei Fong off when they are caught by Sato and Amon’s lead Henchman.

Asami shows up and sees that her Dad is a part of the equalists.  She asks why and Sato tries to convince her to join them, saying that benders took away her mother are ruining the world with their abusive power.  He gives Asami a glove to ask her to join him, instead she uses it to electrocute Sato and Amons henchmen Asami, Mako, Bolin, Korra, Tenzin, and Chief Bei Fong are then able to escape.

Mako tells Korra that he is sorry that he didn’t believe her and Korra tells him that she is sorry that the whole thing happened in the first place.  Mako then asks Korra if it’s still alright if they move in with her on Air Temple Island, Korra says “of course” and that Asami is welcome too.

Go To: The Legend of Korra Episode 8 »