5 years ago
Interesting review for you today. Today my Korra Nendoroid figure arrived and I think more Avatar and Korra fans need to know about this figure, so here is my review. I will immediately direct you to my video review of the figure where I go really in-depth showing off the figure.
https://www.youtube.com/watch?v=J-7vhVwDS5s
I will give some brief written thoughts on the figure in case you don't have time to watch the video.
Korra Nendoroid Figure 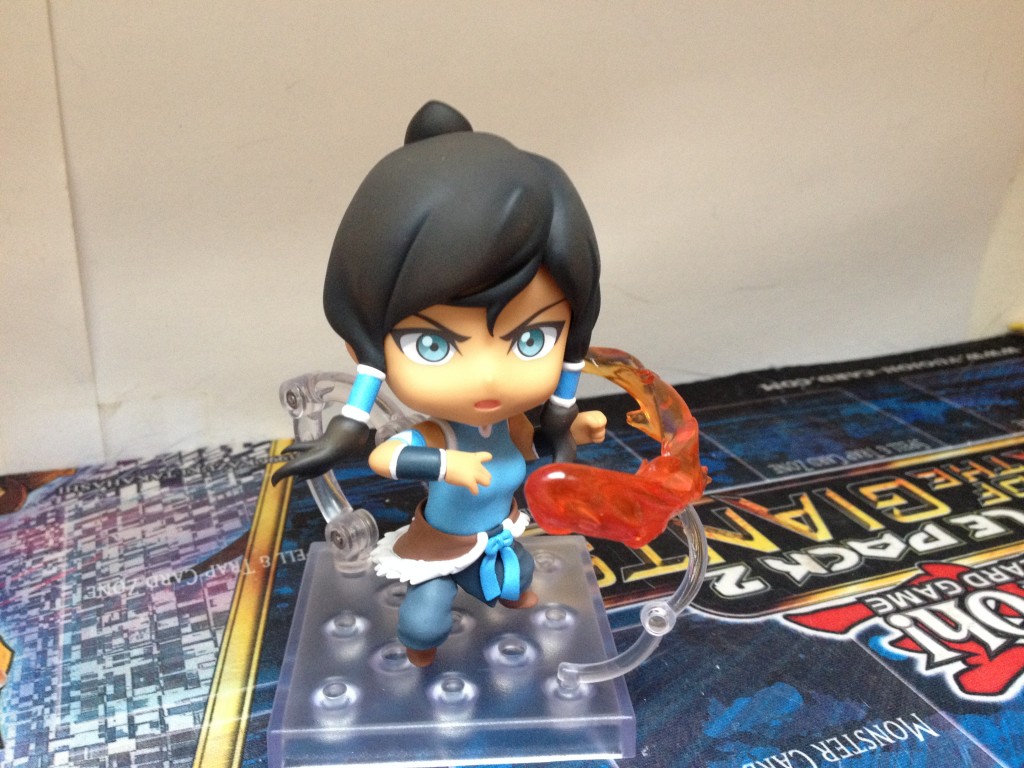 First things first this is the first Japanese figure for Korra (or Avatar) so immediately this is a very unique and interesting release as Japanese toy/figure makers are in general of much higher quality than most american companies. The laws around toy safety not being has harsh in Japan allow for much higher accuracy especially on accessories.

The quality of this Nendoroid quality is amazing, the plastic does not feel cheap or fragile despite some of the pieces/accessories being very small. The paint work is accurate and clean and most importantly the sculpt feels like the character albeit the chibi version of Korra in this case.

For those unfamiliar with Japanese figures or even higher quality figures in general a surprising aspect will probably be the inclusion of various additional arms, legs and even an alternate face. These figures are trying to be as accurate to the character as possible despite the chibi style so they get around the lack of articulation on the limbs by simply providing additional limbs in different positions and they give extra faces so you can change the expression. It means there are so many posing options with this figure when you combine the articulation that the figure does have with the option to swam limbs, faces and even add in the effect parts. 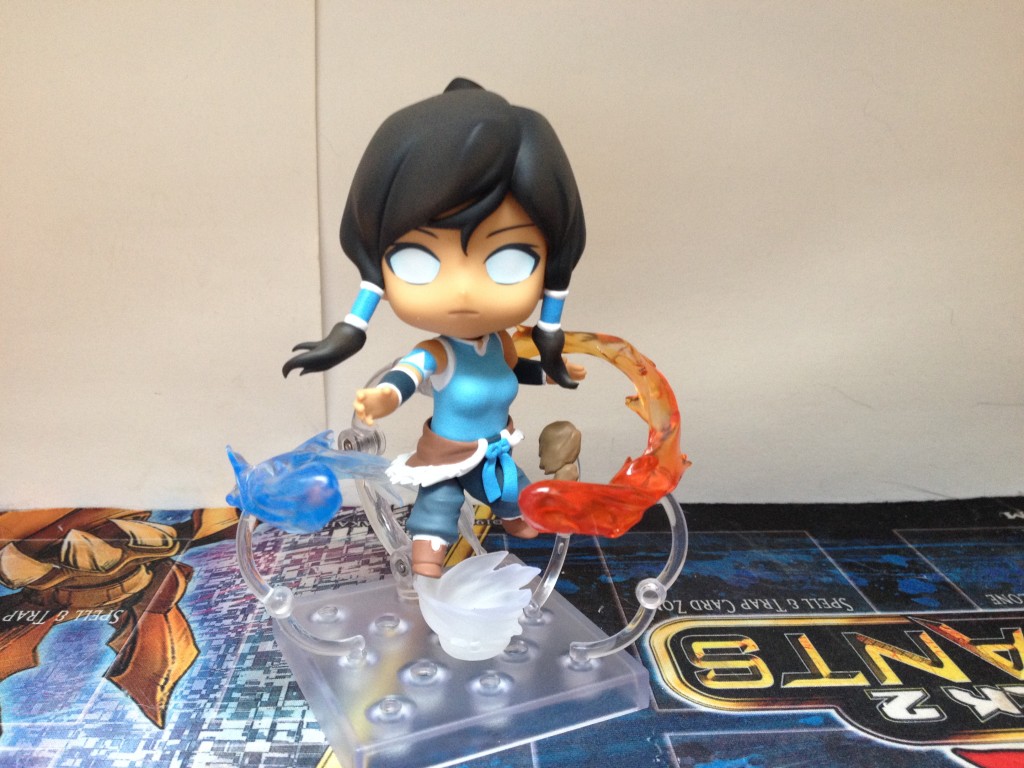 You can have Korra on her own with no bending effects, you can have her with a closed fist or an open palm, in a combat pose or preparing for a flying kick. Then you can have it be a pose in or out of the Avatar state with the face swap. All of these parts swaps are very easy to do, the arms, hands and legs can simply be pulled out and changed with ease, with the face you have to pull off the front of the hair and then you can just exchange one face for the other. It all feels tight, but not so much that it is difficult to make a quick change. The only issue is that the legs that are given are very specific and despite the ability to mix and match you can really only get 2 or 3 different poses with the legs. If they had found a way to make just 2 straight legs that had a knee joint I think the figure would be perfect.

Since the the figure is chibi styles and also because it is more of a collector item than a toy for playing with, it comes with a display stand and connections for Korra herself as well as 4 smaller display "arms" for the 4 bending effect parts. The "arms" are all articulated with the one for Korra having more motion than the 4 smaller ones, they all work well and the only issue is with the effect parts themselves. 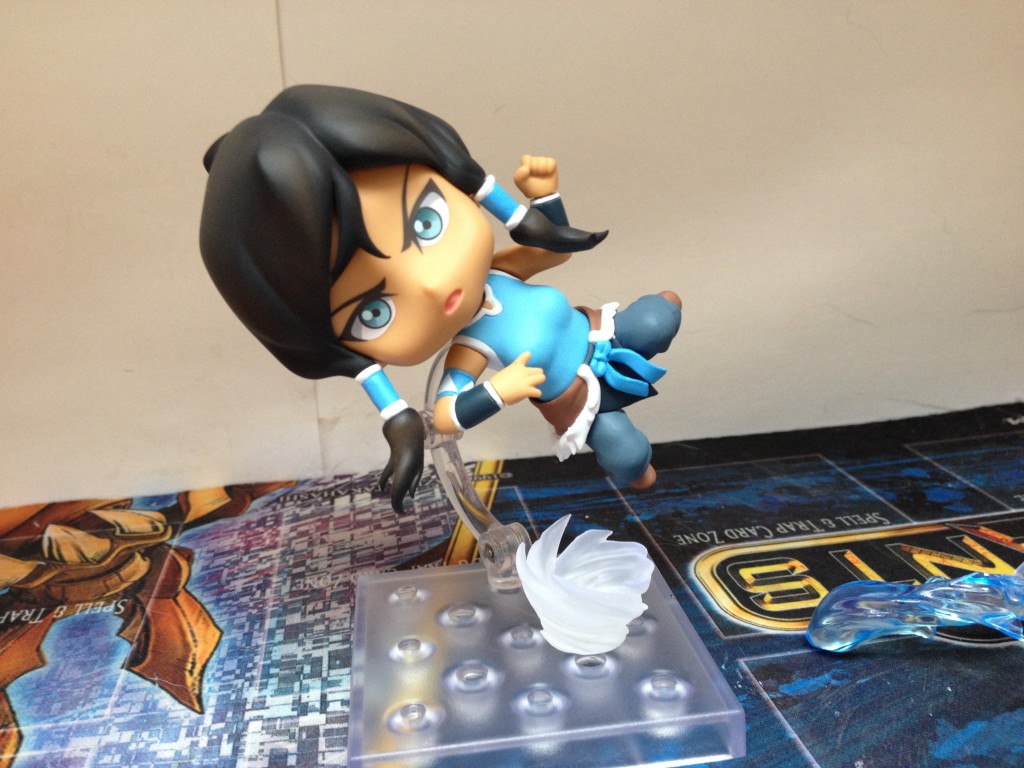 We get a long stream of fire, a long stream of water, an Air cyclone and a small rock for the earth effect part. The first 3 look really nice with their use of clear plastic, but the Earth effect part is a bit of a joke, it is tiny and feels thrown in just to complete the 4 elements. I don't expect to be given a massive boulder half the size of the figure, but the rock should have IMO been at least 2 times the size of what we get. It means it just doesn't look all that good when you try to pose Korra just earthbending, meaning the only use for this effect part is as an addition to the other effect parts again highlighting that it is just their to complete the set rather than a part that was really thought through. I can only hope that if they make more Korra or Avatar nendoroids that they make a better earth effect part because that could then be used with Korra. The only other issue with the accessories would be that the fire and water parts feel too big, they are so long and curved in such a way that you can really only put them in one spot around Korra, the fire has to be arcing around Korra's left and the water around her right. I feel if they cut the length by a third or so they would be much easier to use and would overall look better. The Air effect part I do like, but again feels overly specialised, you are primarily meant to use it where Korra is suspended over the air vortex with the stand, but it has a socket for use with the stand arms, but the piece is completely flat on the bottom for use with this pose so it looks weird if you try to suspend it in the air. 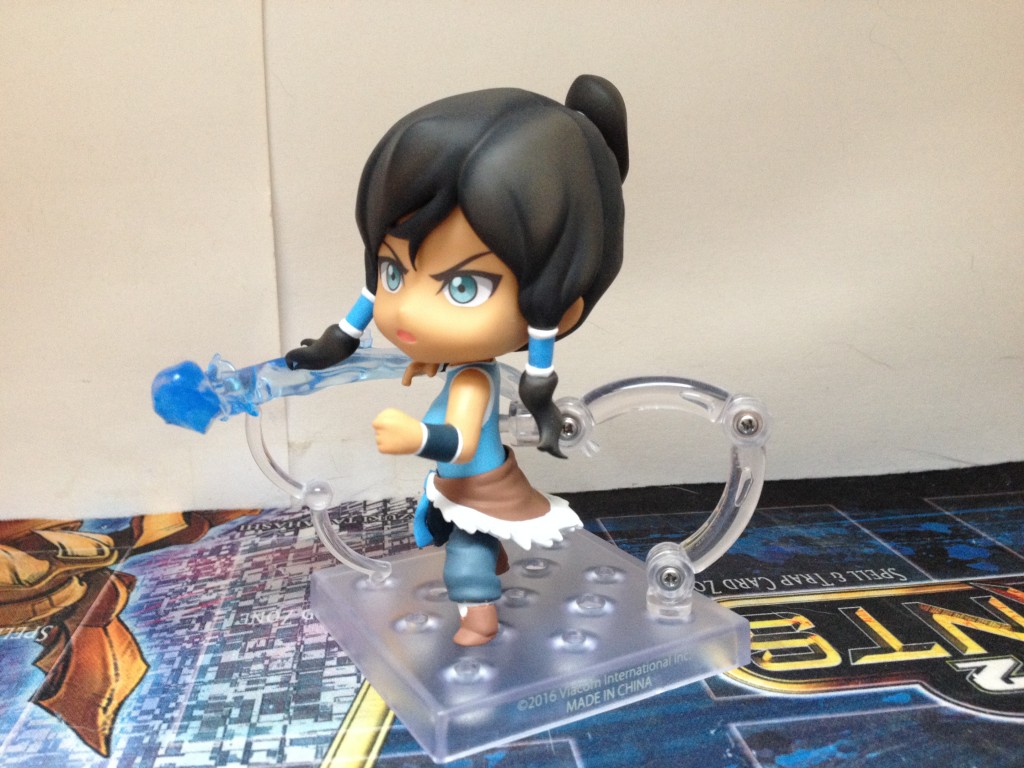 So overall an excellent figure, with a high build quality and great options for poseability, the only slight issues would be that some of the alternate legs and the effect parts seem overly specialised for use with one particular pose when perhaps it would have been better to make something more generic for use in many different poses. A smaller ball of fire instead of the very long stream supplied would be an example. Right now this is the only Korra action figure, every other figure released has just been a statue. This is a very unique merchandise release and right now we do not know if GoodSmile Company plan to make more Avatar or Korra nendoroids so I would highly recommend this figure to Avatar fans if you have an interest in action figures.

The price deserves a mention. Depending on where you order it from the price may vary, but it is in or around $50. This may seem like a lot for the size of this figure, but when you take into account that it is coming from Japan and the general high quality of the figure with the extra parts, effects and the stands it becomes a much more reasonable price. This is a collectable item, not something you will find in every toy shop you go to and thus demands a higher price.

Conversation 0 Comments
Have fun. Don't be mean. Feel free to criticize ideas, not people.
Create an account in order to join the conversation
Create AccountLogin
More Like This
Voice Actor for Korra (and others) Revealed, Tenzin, and other Characters
Team Avatar In Super Hero Costumes
The Legend Of Korra Book 3 Change - Art of The Animated Series Review