The Legend Of Korra Episode 10 – Turning The Tides Review 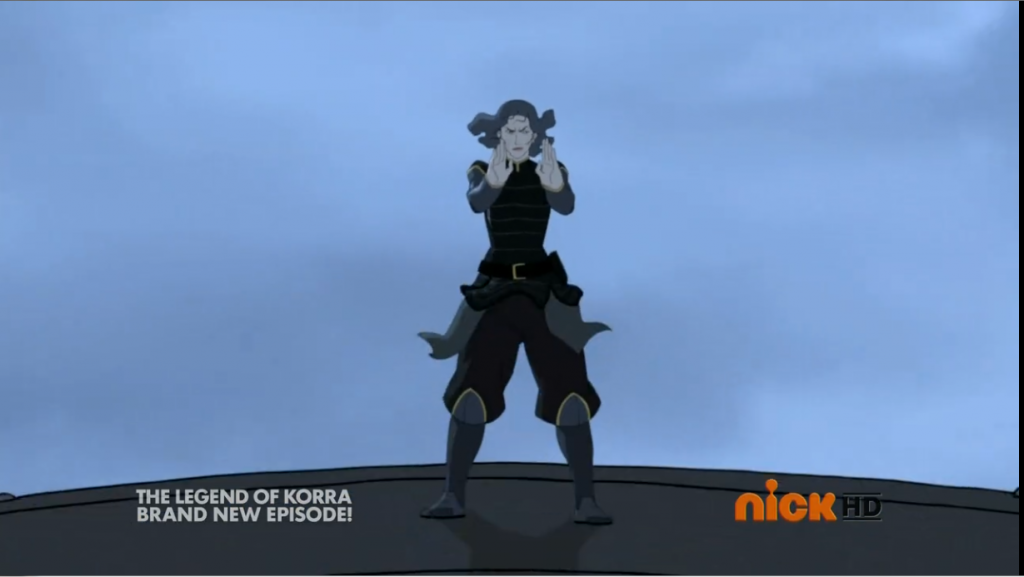 Oh “Turning The Tides”, this episode just surprised me in so many ways, I was not  prepared for things to ramp up and get so dramatic and intense so quickly, I was expecting more of a set up for the war with a cliffhanger of an invasion force heading for the city. How wrong was I, this episode was an absolute emotional roller coaster the whole episode. The sheer range of emotions you have just watching this episode is stunning, from cute moments, to epic moments, dramatic, sad and tragic moments back to joy and even more tragic and nostalgia at the end. It is a credit to the show that is can 1/ surprise you so much and 2/ make you care so much about these characters only 10 episodes in. The Korra Krew have done an amazing job with the show and especially this episode. I am not sure exactly how to break down this review so I will just see what happens as I type.

I guess the first thing I want to talk about is just the Equalists, Amon and Hiroshi starting their attack on the city. Seeing the scale of their forces and how nearly unstoppable they are makes them such a threat, the Airships easily take out the police ones. Even throwing some undercover attacks in their too with how they take down the other members of the council, it shows how well planned out the attack is. They have taken out the leadership of the city, then they focus on the police with the perfect way to take Metalbenders down, Manet + Electricity = Win over Metalbenders. Even the brutality of the Equalists in them attacking Air Temple Island, if they succeed then their are no Airbenders left in the world, but more on that later. We don’t see much of Amon in this episode, but he just grows and grows as a villain, I still wonder what his main goal is he seems so eager now to take out Korra, what has changed for him. He refers to the Equalists as They, and not we, I may be reading to much into that but it is like Amon does not consider himself an Equalist, I need to have more info on Amon in the finale, so much mystery in this show revolves around him.

Next I want to talk about the attack on Air Temple Island this whole scene. Once we saw an Airship heading for the Island the intensity of this episode just sky rocketed, because the kids and a pregnant Pema are their and no one wants them to come to harm, such a peaceful place being attacked, shocking. Seeing the Order Of The White Lotus guards show why they are there was great, they are actually powerful benders and are eager to protect the Island. But there are only so many of them and a whole Airship of Equalists, some slide down ahead of them leaving Lin as the last line of defence, I will focus on Lin more later on. She fights well but the numbers eventually bring her down, until the kids arrive to save the day. So this scene goes from “YES OWL GUARDS GO” to “NO LIN” to “WOOT AIR KIDS GO”, Jinora comes in on her glider, Ikki on an Air Scooter and then Meelo just steals the show her giving us a demonstration of his unique style of Airbending, using fartbending to his advantage he goes into this battle rage I like to call “The Meelo State” and just destroys a whole group of Chi Blockers as they save Lin. It hurt how much I was laughing when Meelo was fighting, this in the middle of a super dramatic moment. Then add in that before this happened, Pema went into labor, the baby was being born as this fight happened. Tenzin and Team Avatar return and we have a nice moment between Lin, Tenzin and the kids as she compliments Tenzin on their training.

The baby is born with no trouble, Tenzin and Pema have a second son, who they name Rohan. We assume he is a bender based on what Katara mentioned in the first episode when she touched Pema’s bump. This was such a touching and heartfelt scene within such an intense episode, the 3rd birth we have seen in Avatar after Baby Hope in 212 and Baby Aang in 306. This is sadly cut short as more airships attack the island, Tenzin realises his priority at that moment is to get his family to safety and Lin knows this too as they are the last of the Airbenders, if they are captured the Airbenders are no more. Within this scene Korra gets some nice development when she realises that they do all need to be patient and wait for reinforcements. So Tenzin, Lin and his family leave on Oogi as other Air Acolytes leave on other Sky Bison, but they are pursued by 2 Air Ships which was again a dramatic and evil moment, in that Amon knows it has to be the Airbenders escaping and is set on eliminating them. This leaves Team Avatar on the Island as the second wave attacks, we have the first of the heroic sacrifices in this episode as the OWL guards cover their escape, but are captured, we get a great moment when Naga leaps into the air and just swats The Lieutenant aside like he was nothing.

Then I have to cover the big moment of this episode, Lin buying Tenzin’s family some time to escape. She realises very quickly that Oogi cannot outrun the Air Ship and that she must protect this last Airbender family at all costs, there is that moment where she looks back at them all and they look at her, they all know what she is doing for them, there is no “No Lin” moments as they all know it has to be done. She graps a rope with her metal cables and swings to the first Airship. The Beifongs have a history of doing amazing things atop airships, Lin continues this, she lands on the airship knowing she is either going to die as the Airships go down or is going to be captured and lose her bending, all this for her ex-boyfriend and his family, there is no jealousy here, it is Lin doing what she believes is her duty to protect the last of the Airbenders. She gets into her metalbending stance as the epic music plays, and tears the first ship apart as she leaps to the other one, she damages it, but is captured quickly. Her sacrifice is not in vain as she has damaged it enough that it must stop the pursuit and turn back.

But if that Heroic stand was not enough, she is then brought before Amon, who offers her a deal: She can keep her bending if she tells him where Korra is, she refuses. Amon then takes her bending away, she is not scared or freaking out, she accepts it and as she slumps to the ground it is just an utterly tragic moment and the fact that this was shown on Nick in the morning is just insane, I was pretty emotional during these scenes and it takes a lot to make me emotional, I wonder how the kids felt. Lin a character we did not know really until episode 6, and in these 5 episodes has gone from being the person who is mad at Korra a lot to being a complete fan favourite, that is stunning writing.

I will quickly cover the relationship stuff, Mako and Asami. I have seen a lot of hate directed towards both of them, IMO they both have rights and wrongs in the situation. Mako is a bit silly for not being able to see why Asami would be upset at him holding Korra’s hand as she sleeps and kissing her, but is partly right in that he is just showing that he cares about a friend in trouble. Asami perhaps is being a bit jealous at Mako holding his friends hand who is injured and nearly unconscious, but was right to confront him about the kiss. I just hope that they do not go down the route of having Asami be so jealous that she joins back with her father, I hope we see some emotional heart to hearts where they either resolve of temporarily resolve the romance.

General Iroh and the United Forces. Wow so much nostalgia in one character. He has ATLA Iroh’s old rank of General, his name is Iroh, he is voiced by Zuko’s voice actor, Dante Basco, we assume he is the son of Zuko’s daughter (The Fire Lord), Zuko’s grandson. Wow, and while the voice perhaps would have been better if it was more different than Zuko’s I thought it worked quite well. We don’t really know him yet, but an exciting character reveal. The United Forces itself is almost more interesting, I assume that they are the combined military of the 4 nations and United Republic, I hope we get more on this organisation too.

Some final points, I liked them referencing the “AvaCar” again and showing what happened to it with Asami in jail, Korra has to park it herself and crashed it into a lamppost. Tenzin Airbending his attackers was great, showing the mastery he has of Air, that Tornado move was great.

In summary, the most dramatic episode of the show so far, I don’t think I would be too off base saying the most dramatic episode of Avatar ever. The emotions this episode made me and many other fans, tells you how good this show is and how well written it is. How are they going to make things better than this for the finale, and according to Bill Rinaldi, they have done this more than Tenfold O.O. For me the finale needs to show Korra Airbending, the book is called Air so I think it has to happen. I want an explanation about these unique benders like Yukone, Tarrlok and possibly Amon. I want to know who/what Amon is, he needs more character development, we need to be introduced to the United Forces and Iroh, the relationship stuff needs some resolution and I really think Mako and Bolin need more character development, especially Bolin.

I am excited, look out for my double feature review next Monday on K111 Skeletons In The Closet and K112 Endgame. Also for more insight into this episode please have a listen to the podcast where we discuss this episode in great detail

Conversation 0 Comments
Have fun. Don't be mean. Feel free to criticize ideas, not people.
Create an account in order to join the conversation
Create AccountLogin
More Like This
When we hit our Lowest Point we are open to the Greatest Change
Toph - The Blind Earthbender
David Faustino Hints at a Summer Air date for Korra
K411 Kuvira's Gambit Preview Clip