The Track Team Excited to work on Season 2 of Korra, PLUS Learn more about the process behind the music and sound of Korra and ATLA 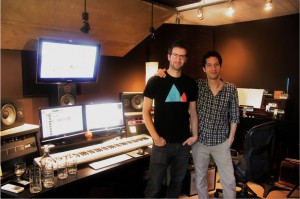 The Track Team in Jeremy's Studio
The Track Team (Benjamin Wynn and Jeremy Zuckerman) Are the Dynamic Duo behind the Legendary Music + Sound Design for The Legend of Korra and Avatar The Last Airbender[/caption] Just got back from a visit to The Track Team Studio with Jeremy Zuckerman and Ben Wynn (the brilliant composer and sound designer behind the ATLA and Korra soundtrack).  Here are some of the things we learned about the process for making the soundtrack and sound effects of Avatar and Korra a reality. Special shout-out to Donna (a long time community member) who put the event together!  We were also joined by Kate, who was with Donna at this year's Comic Con. One of the most mentioned components of the Avatar series is the surprisingly incredible plus unique Music and Audio, this is some insight into how it all happens: Short Work Timeframe Jeremy and Ben work in two separate home studios collaborating the entire way, most of the time they only have a week or two after seeing the final animation before they produce the incredible music and sound effects you hear in each episode.  Ben works primarily on Sound Design while Jeremy focuses on the music and composition. It was super funny to see some Korra Book 1 scenes that didn’t quite have all the voice actors in place yet, so Mike DiMartino (Co-Creator) was voicing Mako or Asami at some points. [caption id="attachment_5800" align="alignleft" width="363"]

Inside The Track Team Studio:
It was awesome to see The Track Team in action
(Pictured from left: Admin / Jordash (Jordan), Jeremy Zuckerman, Benjamin Wynn, Donna, Kate [Bottom] )[/caption]Extra Painstaking Effort Goes Into making each episode sound awesome Jeremy showed us his track listing for a Korra episode and it was a crazy array of over 300 tracks (how they’re able to organize and understand it all is beyond me).  For any music / composer type people out there, they primarily work with Logic Software.  Jeremy and Ben mentioned that many commercials and movies he’s worked on in the past usually has under 10 stems, which goes to show, a lot of extra painstaking effort goes into making ATLA and Korra masterpieces. Jeremy also creates most of the music in a Midi (computerized format) and then later personally conducts talented violinists, violists and cellists, etc... who play The Track Team’s music inside of Jeremy’s Studio.  Due to the size of the studio (only 3-4 players can fit) Jeremy often has to conduct multiple takes which are then layered on top of each other to make it sound like a full on orchestra. Ben and Jeremy created an entire self-recorded library of Taiko Drums for the trademark Avatar Drums used during many of the action scenes. Another interesting fact that Ben told us is that from his intensive work on the Avatar project he had to see a doctor and have surgery on his wrists (scarring him for life) due to the amount of time and intensity he put into working on the sound design for the project. Both are Excited to work on Book 2 “Spirits” Music with a wider array of Abstract Music & Sound Design They are excited to work on music and sound design for the Avatar Spirit World as it allows for a lot more exploration of abstract ethereal music and sound design (like we heard a bit of in ATLA).  And they get to use instruments and sound effects they rarely ever get to use. [caption id="attachment_5808" align="alignright" width="300"] 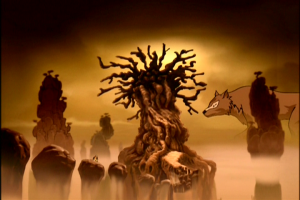 The Track Team is Excited to Work on the Abstract Ethereal Music and Sounds typical of the Spirit World[/caption] The Track Team doesn’t have many solid ideas yet for the music or sound of The Legend of Korra Book 2 because until they are able to see the final animation they won’t know exactly what is required to finish the Episode (The Track Team being among the last people the episode goes through before it airs). Many of the Sound Effects “disappear” into the background but make the entire episode so much more engaging, we watched part of an episode without some of the sound effects The Track Team adds, it’s surprising how you don’t realize how much it adds to each episode. No, they don’t know the Korra Book 2 Release date, but the team is optimistic that the entire Korra team is making excellent progress. Nick looking at stats for ATLA Soundtrack Chandler (The teams PR man), told us that Nickelodeon is looking over the stats for the possible release of the Avatar The Last Airbender Soundtrack that fans have been clamoring for since the show began. Hopefully the extreme amount of signatures on the online petition will help allow the Soundtrack to be officially released. Click Here to sign the Petition for an Avatar The Last Airbender Soundtrack. Other Trivia
Conversation 0 Comments
Have fun. Don't be mean. Feel free to criticize ideas, not people.
Create an account in order to join the conversation
Create AccountLogin
More Like This
K209 The Guide up on Nick.com
The Legend Of Korra Book 2 Spirits Awards - Voting Closed!
Aang With Puppy Dog Eyes
Avatar The Last Airbender & Korra Fans Holiday Shopping Guide
The Legend Of Korra Episode 5 “The Spirit Of Competition” To Air Today
K304 In Harm's Way and K305 The Metal Clan Air Tonight
Book 3 Change Episode 1 and 2 titles possibly revealed.
The Legend Of Korra Book 1 - Air Art Of The Animated Series Review

First Footage of Korra in Combat?
It's a Bird, It's a Plane, It's General Iroh!