Starting out in the Firenation 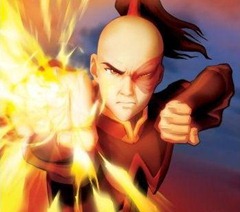 Zuko was born as a child of the Firenation Leader (The Firelord) and was destined to become the next Firelord."  However he questioned a general during a Firenation war meeting about his plan to send brand new Firenation soldiers to their certain deaths in order to create a distraction for the main Firenation army."  For his outburst Zuko was sentenced to an Agni Kai (Fight to the death) with his own father (The Firelord)."  As an act of -mercy" his father only scarred his face"  permanently and banished him with the only way to come back being the capture of The Avatar.

The Chase of The Avatar 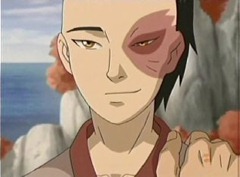 Iroh takes on Zuko as his own son, after Zuko's banishment

From the moment Zuko was banished from the Firenation he began his chase of The Avatar, it obsessed his every waking moment."  Even to the point of endangering himself and angering his crew."  Probably only the patience and instruction from Uncle Iroh kept Zuko alive through the turbulent transitioning periods of his life."  Nearly every waking moment consumed Zuko's ambition to capture the Avatar and restore his -honor". 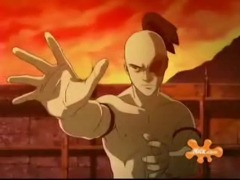 Zuko almost captures The Avatar near the beginning of the series, however he underestimates his power and Avatar Aang is able to escape."  While Zuko is in getting his ship repaired Admiral Zhao guesses the nature of why Zuko's ship is damaged (it was damaged during the Avatars Escape)."  Zuko denies this, and as it goes Admiral Zhao finds out the truth and calls Zuko a traitor and tries to hold him captive."  Zuko then challeges Admiral Zhao to Agni Kai (Firebending Duel usually to the death).

Zuko defeats Admiral Zhao in the Agni Kai but allows him to live (which makes Uncle Iroh very happy)."  But now Admiral Zhao knows that the Avatar is alive and sets out to capture him before Zuko."  Admiral Zhao uses an elite team of archers to capture Aang."  After the archers capture Avatar Aang, Zuko takes on his alter ego, known as The Blue Spirit and sets Aang free from certain life-long imprisonment.

I believe this initial point was the first part where Zuko begins to realize who he truly can become.

The Chase of the Avatar Part 2

So Zuko sets Avatar Aang free only to chase him again."  Admiral Zhao attempts to have Zuko assassinated by pirates and Zuko barely escapes with his life."  This sets the stage for a very interesting line of events."  Admiral Zhao believes that his assassination attempt succeeded and invites Uncle Iroh to join him as his general on a siege of the Northern Water Tribe (where Aang is learning how to water bend)."  Iroh accepts and uses his position to allow Zuko to disguise himself as a Firenation soldier and join the Firenation army on the siege of the Firenation. 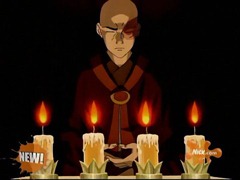 Zuko uses his position to capture The Avatar while Admiral Zhao and his army is attacking the Northern Water Tribe."  As Zuko captures him Katara defeats him using her newfound Waterbending skills and they almost leave Zuko to die, but Aang insists that they take him along and save his life."  Avatar Aang is beginning to see another side to Zuko.

Meanwhile Admiral Zhao is about to do the unthinkable, which is to destroy the Moon Spirit to take away the Waterbenders abilities."  What Zhao doesn't realize is that removing the moon upsets the entire balance of the Avatar world."  This forces both Zuko and Uncle Iroh to attempt to stop him, Avatar Aang uses the anger generated by the Moon Spirit to cause the Firenation army to retreat, saving the Northern Water Tribe from certain destruction. 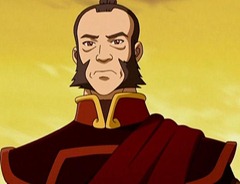 Transformation Point 2 - Fugitive to the Firenation

Zuko once again resumes his hunt of The Avatar but this time is interrupted by his sister Azula, who informs Zuko that his father Firelord Ozai has restored Zukos honor and will accept him back into the Firenation."  As Zuko learns however this is a trick by Azula in order to imprison Zuko."  Zuko and Uncle Iroh escape and thus become fugitives, with no crew, no ship, left to scour the land on their own. 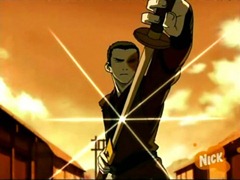 As time wears on, Zuko becomes less and less happy living with Iroh, eventually he becomes so angry that he leaves Uncle Iroh and sets out on his own (Uncle Iroh tracks him discreetly).

So Zuko sets out on his own as a fugitive during this time he travels to a remote Earth Kingdom Village where he meets a little Earth Kingdom boy who reminds Zuko alot about himself."  Zuko takes an immediate liking to the boy, and soon learns that a gang of Earth Bending soldiers are using their powers to terrorize the village, taking money, land, and harming the villagers."  Zuko likes the little boy so much he gives him a dagger given to him by Uncle Iroh."  Zuko also learns that the boys brother is off fighting the Fire Nation in the war. 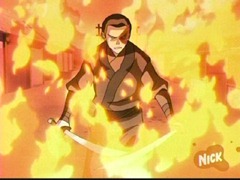 The Earth Kingdom thugs eventually get their sights set on the boys family and take the boys father away to fight in the war."  Zuko challenges the Earth Kingdom soldiers all to a duel, and defeats every one except for the leader who is a well trained fighter."  Also during the fight Zuko cannot use his Firebending or else he will reveal his secret identity (Prince of"  the Firenation)."  During his fight with the Earthbending leader Zuko is almost defeated and in a fit of rage uses his Fire Bending against the Lead Earth Bender."  Zuko quickly defeat him, but the Earth Kingdom Villagers turn their backs on him (who had saved them) even the little boy gives Zuko back his dagger saying he never wants to see him again. 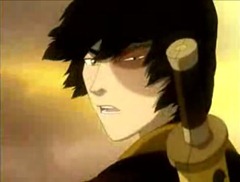 This Solo point for Zuko is very interesting, he is able to live among the Earth Kingdom without killing them, and actually wants to help them, or do something good for them."  Which is very different from the way he was brought up.

Eventually Zuko and Iroh are reunited, Uncle Iroh saves Zuko once again."  Uncle Iroh then journey to Ba Sing Se, the last safe Earth Kingdom City. (And the most powerful). Unbeknownst to them, Avatar Aang and crew are also travelling to Ba Sing Se but that is a different story."  When they arrive at Ba Sing Se Zuko goes through some very interesting changes."  Foremost of which is when he helps the Avatar free his Bison, this act of goodness is so in conflict with what he usually does he becomes sick for many days."  After his sickness he appears to be completely transformed. 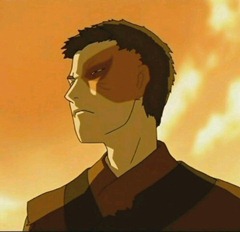 However Azula infiltrates Ba Sing Se with the help of their elite protectors, The Dai Li, After she takes over the city she captures and imprisons Zuko."  Uncle Iroh who knows that Aang and co. are in town goes to them for help."  Toph vouches for Iroh and so they help him free Zuko from Azulas clutches."  Interestingly enough Zuko is imprisoned with Katara so they help rescue both."  However as Aang, Zuko, and Uncle Iroh plus the rest are escaping Azula heads them off and Zuko joins her to capture the Avatar, which means Zuko changes sides again!"  With Zuko's help Azula manages to kill the Avatar, Katara however uses her Northern Oasis Water to revive him and they barely escape."  Azula thinks the Avatar is dead but Zuko is not so sure, because he knows about the Norther Oasis Water.

Prince Zuko is welcomed back to the firenation as a hero for slaying the Avatar, Uncle Iroh is sentenced to lifelong imprisonment for helping The Avatar and his friends."  However history repeats itself, in another War meeting Firelord Ozai tells his men about his plans to eradicate the entire city of Ba Sing Se where Zuko just came from, killing everyone in the city."  This horrifies Zuko but he keeps his mouth quiet, and decides to learn more about the history of the previous Avatar, Avatar Roku."  As it turns out Avatar Roku was a Firebender by birth and a close friend of Prince Sozin who was destined to become the next firelord."  Avatar Roku was called to training as an Avatar, and he had to leave his friend Firelord Sozin behind."  Firelord Sozin it appears became obsessed with uniting the kingdoms as one kingdom under the rule of the Firenation, the now fully trained Avatar Roku didn't see it that way, he saw it as a quest for world domination."  Avatar Roku put a stop to it but didn't kill Firelord Sozin because of their friendship, This angered Firelord Sozin and he eventually betrayed Avatar Roku to his death.

With The Avatar gone, Firelord Sozin began the war on all other nations, Avatar Aang was born as an airbender and the story was begun there."  This was a major turning point for Zuko because he was able to see a time before the Fire Nation was at war with everyone, and how happy the world was during that point.

Zuko decides to leave the Fire Nation and sets out to help The Avatar in his quest to end the war."  As Aang is looking for a Firebending teacher this is great timing."  Aang and the gang however have a very difficult time believing that he has changed until Zuko stops Combustion Man (an assassing Zuko sent after them) from attempting to kill them."  Once they trust Zuko he completely changes and becomes a huge part of the group.

While Zuko is joining the Avatar Team, Uncle Iroh escapes from the Fire Nation prison and joins up with his ancient group The Order of The White Lotus where he planned to help them overthrow the Fire Nation."  Zuko trains Avatar Aang in Firebending and eventually he is able to find his Uncle among The Order of The White Lotus where after profusely apologizing to his Uncle his Uncle forgives him.

Uncle Iroh tells Zuko that he will refuse to become the next Firelord, and that Zuko should be the one to take his fathers place and lead the Firenation to a peaceful coexistence with the other nations. To do this Zuko must challenge his sister Azula who currently held the throne.

Azula who goes crazy over the betrayal of her two closest friends is not her complete self when Zuko challenges her."  Zuko and Katara are able to defeat Azula together. 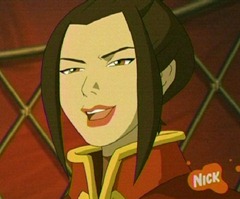 The beginning of Zukos reign

While it was a very unexpected (but great) ending."  Zuko takes over as Firelord and along with the Avatar is able to restore Peace again to the Four Nations. 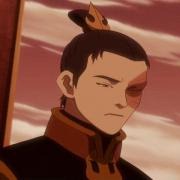 Zuko was by far my favorite storyline and theme throughout the show."  It showed someone who was brought up in terrible circumstances and was able to overcome them and eventually be able to make the right choice and change the world for the better.

Conversation 0 Comments
Have fun. Don't be mean. Feel free to criticize ideas, not people.
Create an account in order to join the conversation
Create AccountLogin
More Like This
New clip for The Legend of Korra Episode 9 Tarrlock decieves Tenzin