As the title says, we have two new interviews just in.

The first is from Avatar creators Mike and Bryan, it is with Comics Alliance and can be found here http://www.comicsalliance.com/2012/04/12/the-legend-of-korra-michael-dante-dimartino-bryan-konietzko-interview/

Once again, not a whole lot of new information, but it is a very interesting interview.

An interesting answer that stood out to me was this

The Spirit World hasn’t changed, exactly, but what will be interesting is to see how the spirit world reacts to Korra’s technologically dependent world.

The first real mention of the spirit world in relation to Korra, adding to the main theme of Korra or Tradition Vs Modernisation. 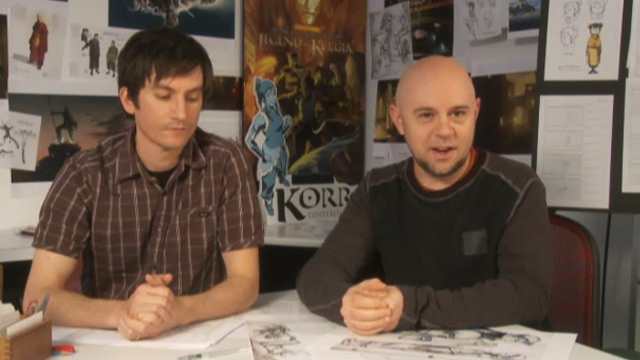 This one is very interesting as it is the first big interview with her about Korra. Worth reading for Janet’s views on working on the show.

In terms of reveals, when asked about what we have to expect from the rest of Season 1 she said this:

I guess nobody has said, “Don’t discuss it.” But I’m always so reticent about teasing too much because I really love for people to just get on board and find out what kind of ride they’re in for while it’s happening. I will definitely say that I think the personal relationships are just as important as the big-picture questions, which I’m really proud of. As with the original series, there are some really interesting philosophical questions that are being raised about “Us versus Them” and bullying and “How important is it being special?” and “Do you set yourself apart too much?” — things like that. And I know that’s sort of vague, over-arcing stuff, but I don’t want to give too much away about the characters and the twists and turns. I mean I do want to, but I’m not going to. [Laughs]

2 Interesting interviews, not packed full of reveals, but some great behind the scenes stuff.

Conversation 0 Comments
Have fun. Don't be mean. Feel free to criticize ideas, not people.
Create an account in order to join the conversation
Create AccountLogin
More Like This
Amon Is Watching You
Sherlock Sokka in Action
K201 - Rebel Spirit and K202 - The Southern Lights Episode Review
Episode titles for K210, K211 and K212
News RoundUp
We All Love Avatar, Even Boromir
The Legend Of Korra Episode 6 “And The Winner Is…” To Air Today
Naga, Scares You To Death, That Is Until You Give Him A Belly Rub
New Korra Trailer
Book 4 Balance Trailer up on Nick.com